Artists who have been victimized by violence often lack the support and resources needed to come forward. For artists who have been affected by the trauma of sexual assault, there are rarely adequate opportunities to create work that addresses their stories within and beyond the larger art community.

La Jolla artist and expressive arts therapist, Elizabeth Tobias, will amplify her fusion of social practice, performance and film making to debut Survivor! Share your 98 Second Story, a short film blending art and documentary that shares the stories of 20 contemporary artists who have survived sexual assault and who participated in a public art project created by Tobias. 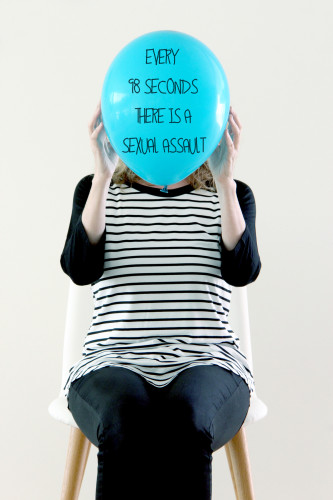 The screening of the 15 minute film will be followed by a round table with artists and community leaders featuring:

The Survivor! Project brings much needed awareness and advocacy to the sexual assault epidemic, one of the greatest human rights violations in the world.

Dr Jennifer Freyd, expert in the field of interpersonal violence has identified that the act of speaking out has a measurable impact on decreasing violence. Consequently, the performance and ongoing project have the potential to directly reduce the statistics. Survivor! Share Your 98 Second Story is a ground-breaking new project that addresses trauma, courage and continuance.

NOTE: This film is intended for mature audiences. Viewer discretion is advised.

Elizabeth Tobias, MA, is an Expressive Arts Therapist, Interdisciplinary Artist, Feminist, Educator and Community Organizer. As an Expressive Arts Therapist, she works in private practice and in clinical settings. As an artist and community organizer, Elizabeth creates immersive works of art and public events that address timely social issues such as interpersonal violence, trauma, discrimination, food scarcity and climate change. Her multi-media projects leverage art to engage the community in cultural, economic and social advancement. Elizabeth earned her MA in Spiritual Psychology from The University of Santa Monica and her Professional Diploma from The Expressive Arts Institute in San Diego in accordance with standards set forth by The International Expressive Arts Therapy Training Network and in compliance with The European Graduate School in Saas Fee, Switzerland.

This project was made possible by The Los Angeles Art Association and DIVERSEartLA.