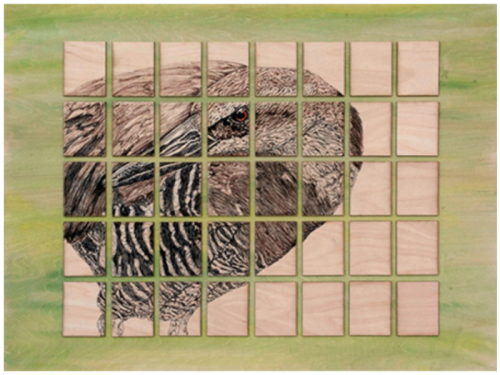 The Guam Rail (depicted here) is extinct in the wild, but captive breeding programs are keeping hope alive for its eventual return to the wild.

For the last decade, artist Stacie Birky Greene has been in a dialog with the nature of loss and hope. Inspired by a National Public Radio report in 2009, she began an epic, long-form arts-based research process, to examine the link between human activity and the decline and extinction of bird species.

“I find myself particularly drawn to the paradoxical issues of
nature’s power and fragility, and its often-fraught relationship with humanity. This has led me to my current project exploring endangered
birds and, more recently, birds that have become extinct in my lifetime.” 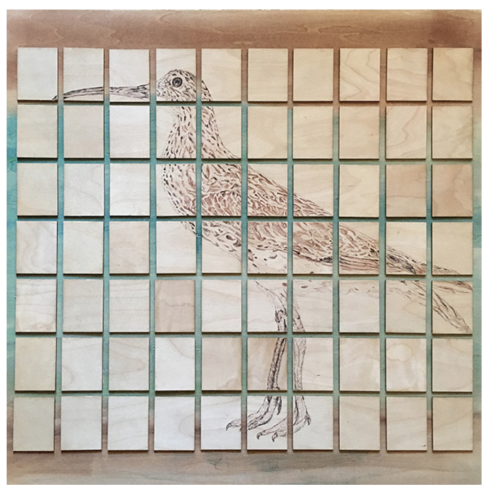 Greene began by assembling an accurate database of extinct and endangered birds with San Diego Natural History Museum curator Phillip Unitt. She updates this database regularly, to maintain track of changes in status for the species and subspecies featured in her compelling artworks.
Because of the challenges of tracking rare species in the wild, it is often difficult to be definitive about species extinction. The labels with the art actually provide the latest known status for the birds depicted.
The impacts of habitat loss, deforestation, pollution, pesticides and human created climate change all play a role. In spite of the presence reminders of extinction and loss, the purpose of the show is not merely to serve as a memorial to species lost.
In particular, the species featured in the small drawings on paper carry a message of possibility. Drawn on hand made paper created by the artist from junk mail shipped to her home, Greene intends the series to be a reminder that all is not lost.
I think of this series (endangered Birds on Paper) as the hopeful possible future, as most of these birds have a chance of surviving.

For the series “Specimen Drawers” I’m using reclaimed drawers to recreate the drawers from Cabinets of Curiosities, holding skins and found objects from nature. I think of this series as the future as these species most likely will no longer exist and all that will remain is their skins and preserved nests and eggs
Sadly, the artist isn’t likely to run out of subjects any time soon.
The pressures that create extinction mount with each passing year, and as the global population approaches 7 billion humans, the pressure on environmental systems only grows in proportion. Birds are highly specialized, and therefore highly vulnerable to sudden habitat loss, changes in climate and falling biodiversity.
I invite you to attend the show, and meet these special creatures. As you walk through the gallery space Greene’s meticulous and lovingly rendered portraits invite you to reflect on those birds gone forever, and those still in the world today. You can even access sound samples of the calls of some of these birds (see the tags with QR codes). These beautiful animals that scientists now believe are the living descendents of the dinosaurs are survivors, intelligent, beautiful, powerful and magnificent in their diversity.
As the artist reminds us, whether and how much that diversity remains intact depends on us.
– Wes Chester, Curator
The Swift is Located at 2820 Roosevelt Rd. SD CA and is open 7 days a week (Tu-Su 9-8, M 9-6) Federal holidays may impact hours. Admission and parking are free.

As a lifelong learner and dedicated volunteer involved in arts and education I approached the E.A.I. introductory class with curiosity and some trepidation. A few prior E.A.I. graduates were in my circle and I highly admired them all, but didn’t really imagine taking on such a large commitment or inspiring to make such a shift in my career path or life direction.

I was awestruck by the end of the weekend. Having never so clearly before been exactly where I should be. My overwhelming feeling was “this is who I am, this is what I do.”

I haven’t looked back and am on the most fantastic journey of my life.

When I attended the Intro Course, I said to myself, “this is what I have been looking for… for so long.” Before the weekend was over, I was already planning the next two years and what I would do to be in this beautiful place.
So, yes! Of course the introductory course changed my life, without a doubt! It was the beginning of another era, another way of feeling and seeing the world around and inside me.

“Judith is the most gifted facilitator I have ever encountered. Her complete embodiment and use of the arts in healing brings amazing results. A whole new world opened up to me after being guided by her expertise and heart-warming sensitivity to the human condition. Whether she is hired as a private therapist, speaker, or teacher, I believe she is worth more than money could ever buy.”

“Inspired. Inspirational. Judith coaxes the soul into being when she teaches. Being her student was nothing less than life changing.”

“You have prepared us so well, thank you. All the vocabulary for us makes total sense- some folks have not a clue what the professors are saying. We do

Thank you, thank you. This experience has been exciting, motivating and extraordinary so far. And it’s really only just begun. I wanted to send my thanks to our Momma EXA bear ♥”

“Oh, how marvelous to be led in creative expression — especially when technology and its offspring run amuck around us, especially when Judith is role modeling, teaching, leading, gamboling with Light and Love.”

“Dr. Essex is a professor and mentor I’m fortunate to have. Her expertise in facilitating a learning environment that allows experience, open-ended growth of trust and competency on both the individual and group levels is uniform. She has taught me to stretch the boundary of current ideas and relations in the modern world, encouraged individual creativity and thought, and continues to have a high expectation for student self-autonomy in learning by doing and making a life for ourselves. I look forward to becoming a colleague in the future with her in supporting the art and health community.”

How to Use the Winter Season as a Time for Growth

Many of us hold a romantic vision of winter, huddling by the fire with stories and songs, candlelight, the celebration of the solstice. Perhaps we even experience a sense of hygge, that close peaceful, warmth and contentment alone or with … read full article