The Expressive Arts Institute Program is blessed by a rich, diverse and talented community of graduate helpers, working in areas all across the city, country and world. A select few of these graduates, have taken on a special role: that of mentoring their “younger sisters and brothers,”  our current institute students through the Method Specific Training Program. Students meet with these specially trained graduates monthly to have their own first-hand expressive arts experiences, and hone their own skills as helpers.
So at this change of seasons, we pause to reflect with this wise and wonderful crew, to celebrate their successes and the ongoing legacy of community.   This year, thanks to the generosity of building neighbor and restauranteur extraordinaire  Randy Smerik,  we sat down to a beautiful meal at Solare’  together,  to celebrate a year  of inspiring success in students and mentors. 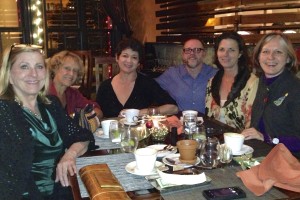 l-r Judith, Francine H., Anita C., Wes C., Mary R., Tish S.
“Swift Look Back” show to open January 3rd, 2014
At 5 years, the Swift Gallery, endowed by local patron Stephanie Swift, still seems in its infancy to me, barely finding its feet as a space for the best San Diego Artists have to offer. But at five years, we have chosen to take the time to look back with new work by the eight artists whose work has graced our walls in solo shows.  In a town known for group shows, the Swift has remained a notable exception. And now we are making a kind of exception to our own rule.
The Swift Look Back Show is a group show, featuring prominent regional artists Anna Zappoli, James Watts, Ellen Dieter, Larry Caveney, Shahla Dorafshan, Diane O’Connor, Warner Varno, and Phillip Petrie. Come see us on the first Friday in the new year from 5-8pm with artists present, to celebrate a beautiful gallery show. 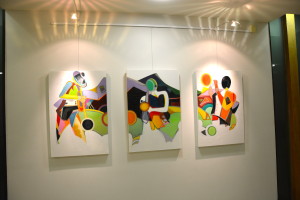 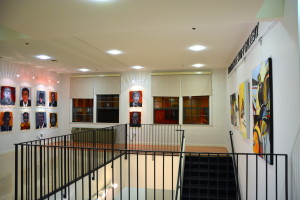 Among the prominent works are a whole wall of Larry Caveney’s new portraits, and five new works from Ellen Dieter’s Jazz series. The exhibition feaures new works and departures from almost every artist, so come enjoy some new art in the new year. See event details here.
Wes Chester- Curator
Diversity Scholarship Funding Sought
One of the proudest heritages of our 15 years of community building is a diverse group of graduates. However, in these challenging economic times, there is a underrepresented population in our studio: low income students in general, and in particular those with Hispanic and Latino roots. As may be noted, this particular deficit in the school is regionally significant. We because need to train helpers who are already in the community and culturally competent to serve an underserved Latino/Hispanic population in San Diego County.

When we created The Expressive Arts Foundation, a 501c3 non-profit, one of the first areas we wished to address is the uneven playing field for economically disadvantaged students. Since the institute education is not supported by traditional educational grants, we have decided to try to create our own fund, to support these critically valuable students, and we are asking your help. Gifts in any amount will help us reach our  goal to include these valuable, academically and artistically gifted students, and are fully tax-deductible through the foundation’s 501c3 tax-exempt status. Contact us for more information 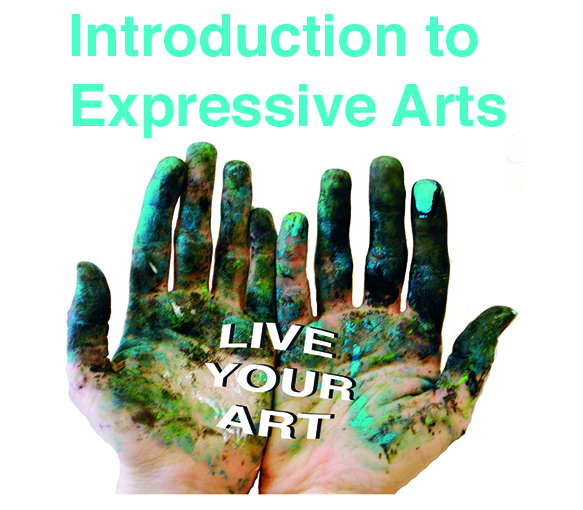 As a lifelong learner and dedicated volunteer involved in arts and education I approached the E.A.I. introductory class with curiosity and some trepidation. A few prior E.A.I. graduates were in my circle and I highly admired them all, but didn’t really imagine taking on such a large commitment or inspiring to make such a shift in my career path or life direction.

I was awestruck by the end of the weekend. Having never so clearly before been exactly where I should be. My overwhelming feeling was “this is who I am, this is what I do.”

I haven’t looked back and am on the most fantastic journey of my life.

When I attended the Intro Course, I said to myself, “this is what I have been looking for… for so long.” Before the weekend was over, I was already planning the next two years and what I would do to be in this beautiful place.
So, yes! Of course the introductory course changed my life, without a doubt! It was the beginning of another era, another way of feeling and seeing the world around and inside me.

“Judith is the most gifted facilitator I have ever encountered. Her complete embodiment and use of the arts in healing brings amazing results. A whole new world opened up to me after being guided by her expertise and heart-warming sensitivity to the human condition. Whether she is hired as a private therapist, speaker, or teacher, I believe she is worth more than money could ever buy.”

“Inspired. Inspirational. Judith coaxes the soul into being when she teaches. Being her student was nothing less than life changing.”

“You have prepared us so well, thank you. All the vocabulary for us makes total sense- some folks have not a clue what the professors are saying. We do 🙂 Thank you, thank you. This experience has been exciting, motivating and extraordinary so far. And it’s really only just begun. I wanted to send my thanks to our Momma EXA bear ♥”

“Oh, how marvelous to be led in creative expression — especially when technology and its offspring run amuck around us, especially when Judith is role modeling, teaching, leading, gamboling with Light and Love.”

“Dr. Essex is a professor and mentor I’m fortunate to have. Her expertise in facilitating a learning environment that allows experience, open-ended growth of trust and competency on both the individual and group levels is uniform. She has taught me to stretch the boundary of current ideas and relations in the modern world, encouraged individual creativity and thought, and continues to have a high expectation for student self-autonomy in learning by doing and making a life for ourselves. I look forward to becoming a colleague in the future with her in supporting the art and health community.”